We Will Rock You: the essential Queen experience in under 3 hours

The best crash course for the uninitiated and a whole lot of nostalgic fun for seasoned fans. 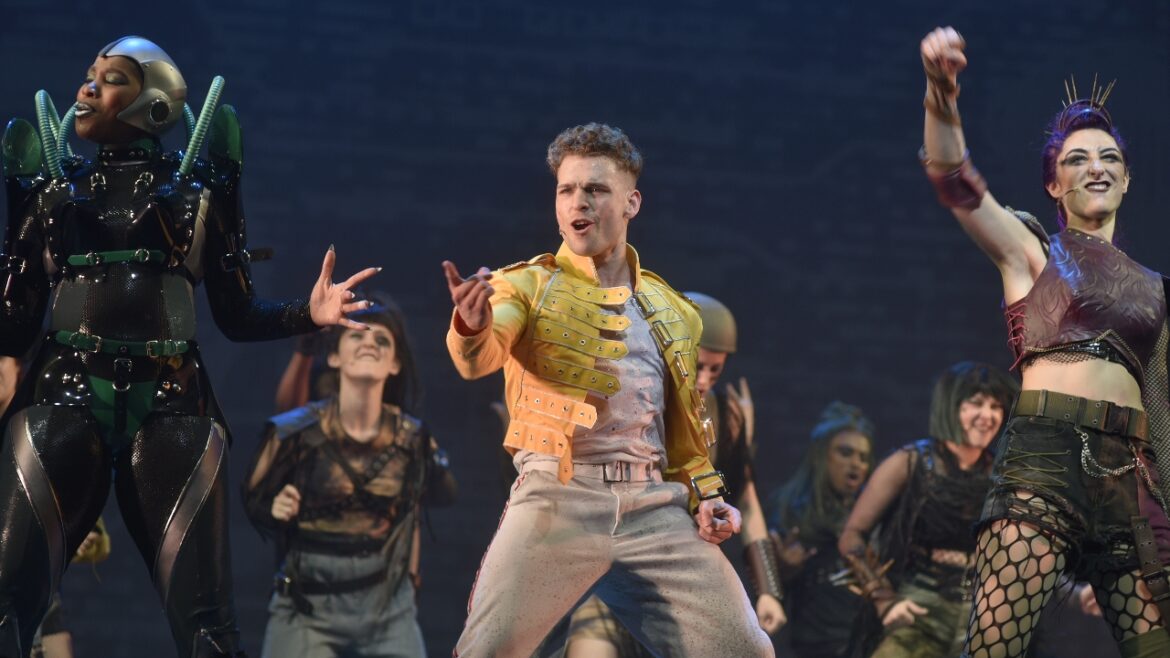 We Will Rock You is what they call a jukebox musical, meaning that most of its songs are well-known pieces as opposed to compositions expressly written for the show.

As you can imagine, this is essentially a ‘best-of’ compilation for Queen, not that the rock band needs any more publicity. Bohemian Rhapsody–both song and movie–is perhaps the most well-known piece of 70s classic rock iconography amongst Gen Z or whatever letter comes after that. 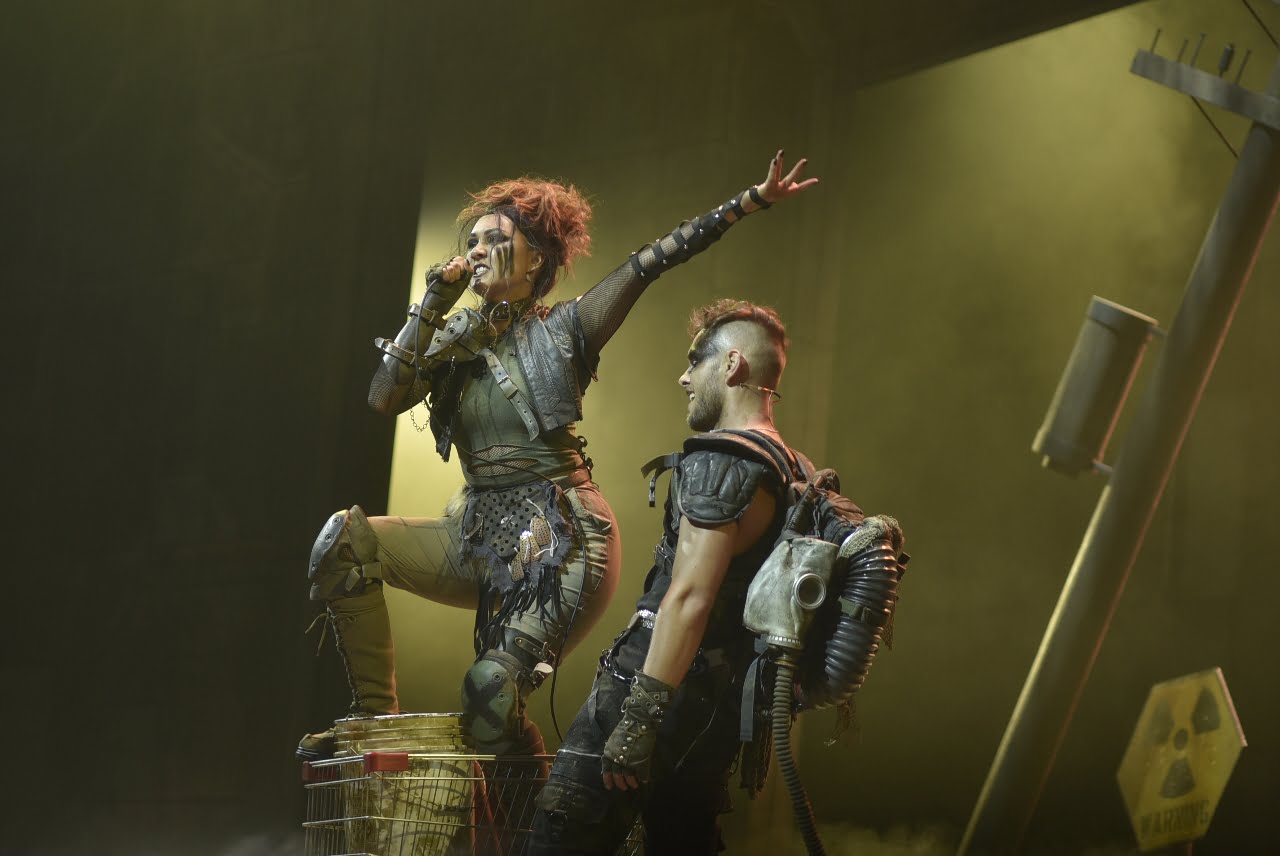 The premise is fairly simple: iPlanet (Earth) is run by Globalsoft Corporation and life (and the music) is as commercial as it gets. Unsurprisingly, counter-culture and subversive elements are squashed out ruthlessly and that includes rock music. However, they didn’t account for our two unlikely heroes: Galileo Figaro (Stuart Brown) is a student that somehow is able to hear music from the past and is driven to break free from the shackles of Globalsoft. He meets a fellow outcast, a goth girl he christens Scaramouche (Nicolette Fernandes), and they both escape the clutches of the Killer Queen (Londiwe Dhlomo) and her right-hand, Kashoggi (Craig Urbani). They cross paths with a resistance group called the Bohemians, led by the eccentric Buddy (Tiaan Rautenbach) along with Brit (Richard Gau) and Oz (Danelle Cronje) to fulfil some prophecy about bringing rock music back and all that jazz. 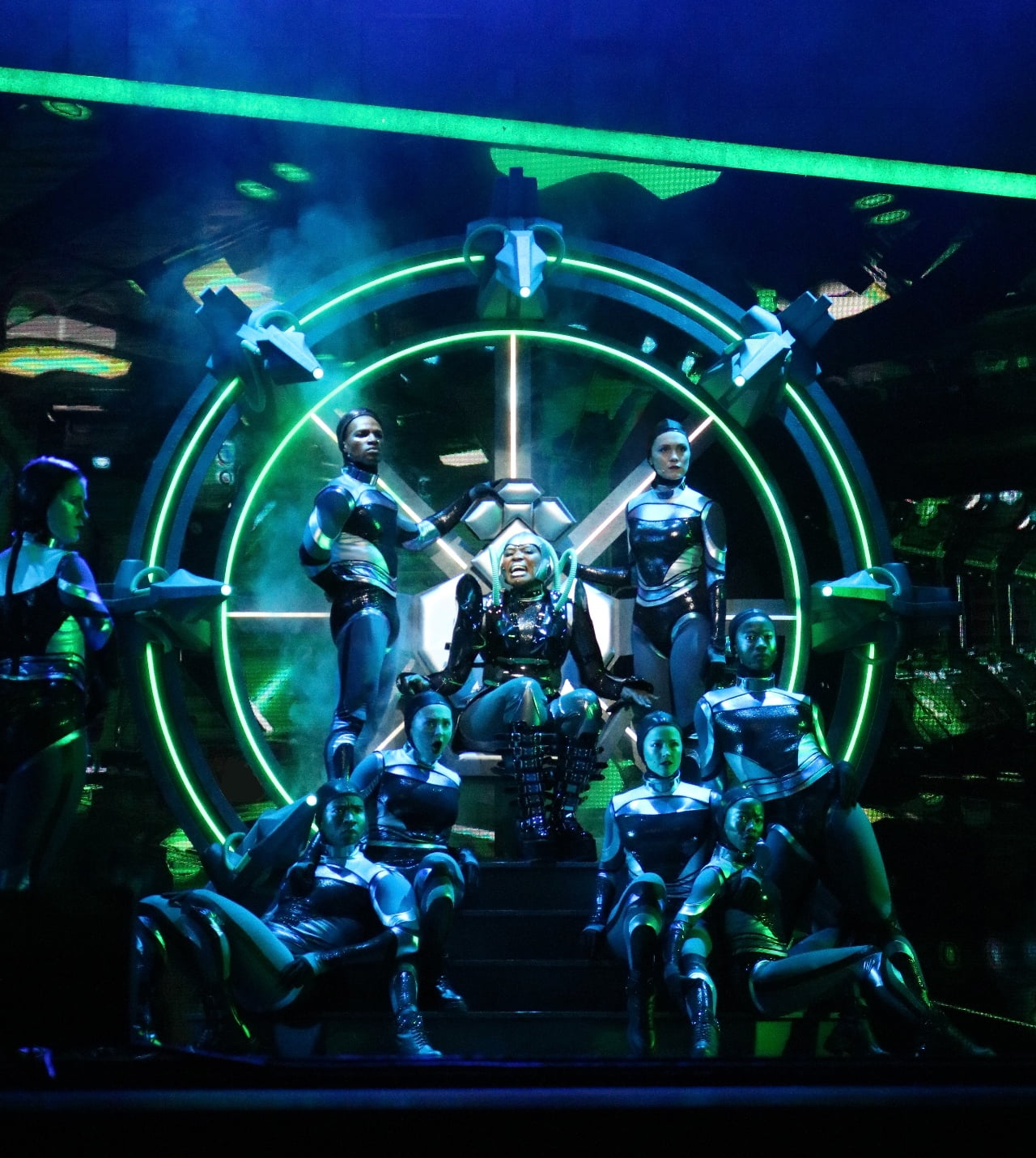 If the story sounds like a throwback–guess what? It is. We Will Rock You is in fact, a 20-year-old musical written by British comedian Ben Elton (and not to be confused with the unofficial queen of England, Elton John). Those from an older generation might find the name passingly familiar as one of the writers of the Black Adder comedy series. When it was first released, the musical was originally panned by critics and I can see why. We will Rock You uses any and every excuse to break into another Queen song in a, ‘let’s see how many we can squeeze into one show’ kind of way, while littered with appropriately 90s British comedy tropes.

But, to poo-poo the silliness and the fun is to essentially miss the whole point of We Will Rock You–the unintentional camp and unbridled optimism of the 80s. Also, big hair and over-the-top costumes, but thankfully the shoulder pads are more subtle here. 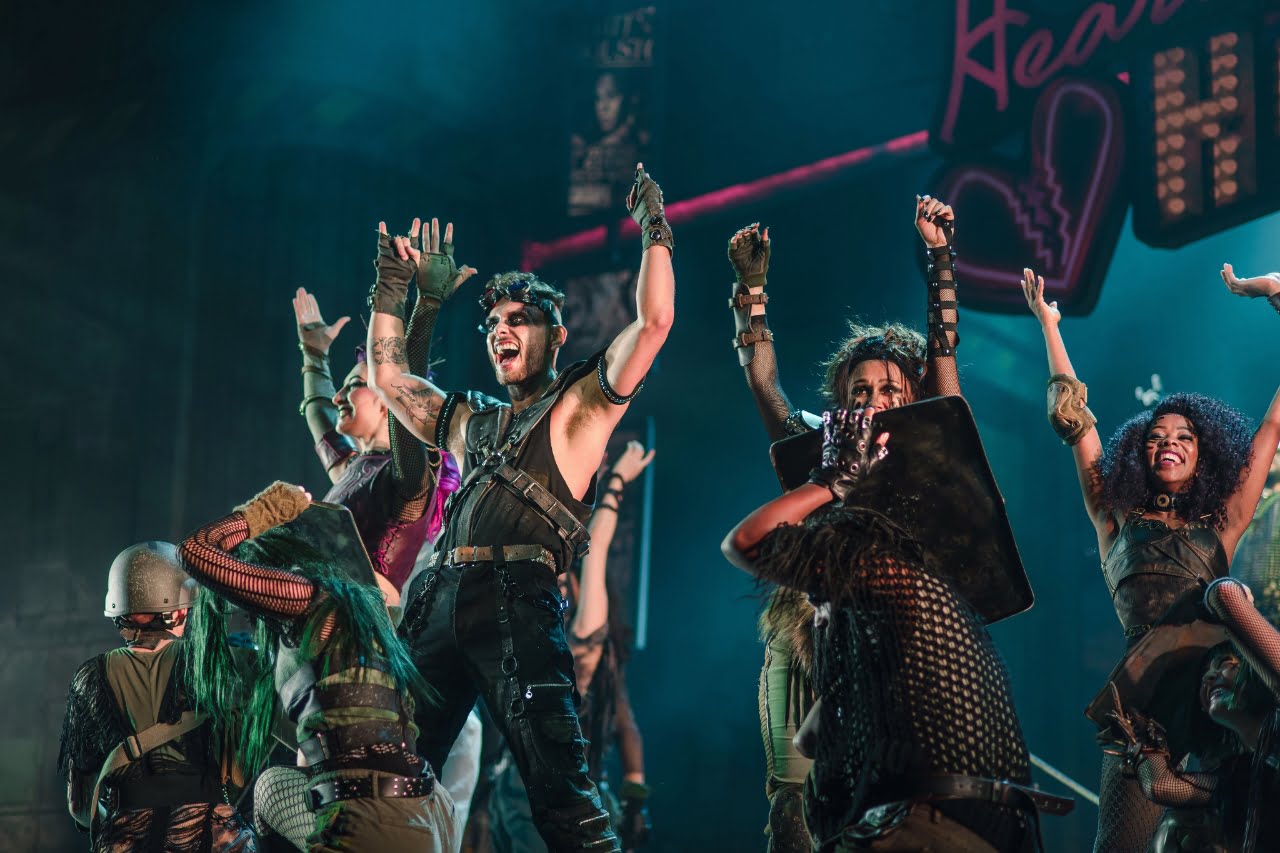 The Bohemians living it up at the Heartbreak Hotel. | Image: Zeus Martinez Photography

And that’s all we need We Will Rock you to be. If there’s one musical catalogue that you can count on to fill up an entire musical with grandiose numbers, then there’s no one you want in the vinyl trenches more than Queen. Even Freddie Mercury supposedly said that he thought of their live shows as theatre and fashion shows rather than just a concert.

Emotionally charged and dripping with dramatic flair, it’s not an exaggeration to say that this feels more like a dramatic visual interpretation of Queen’s greatest hits. In that regard, We Will Rock You nails the spirit of an era. Almost all of Queen’s rock opera songs are here, performed superbly and with gusto by a spirited cast. 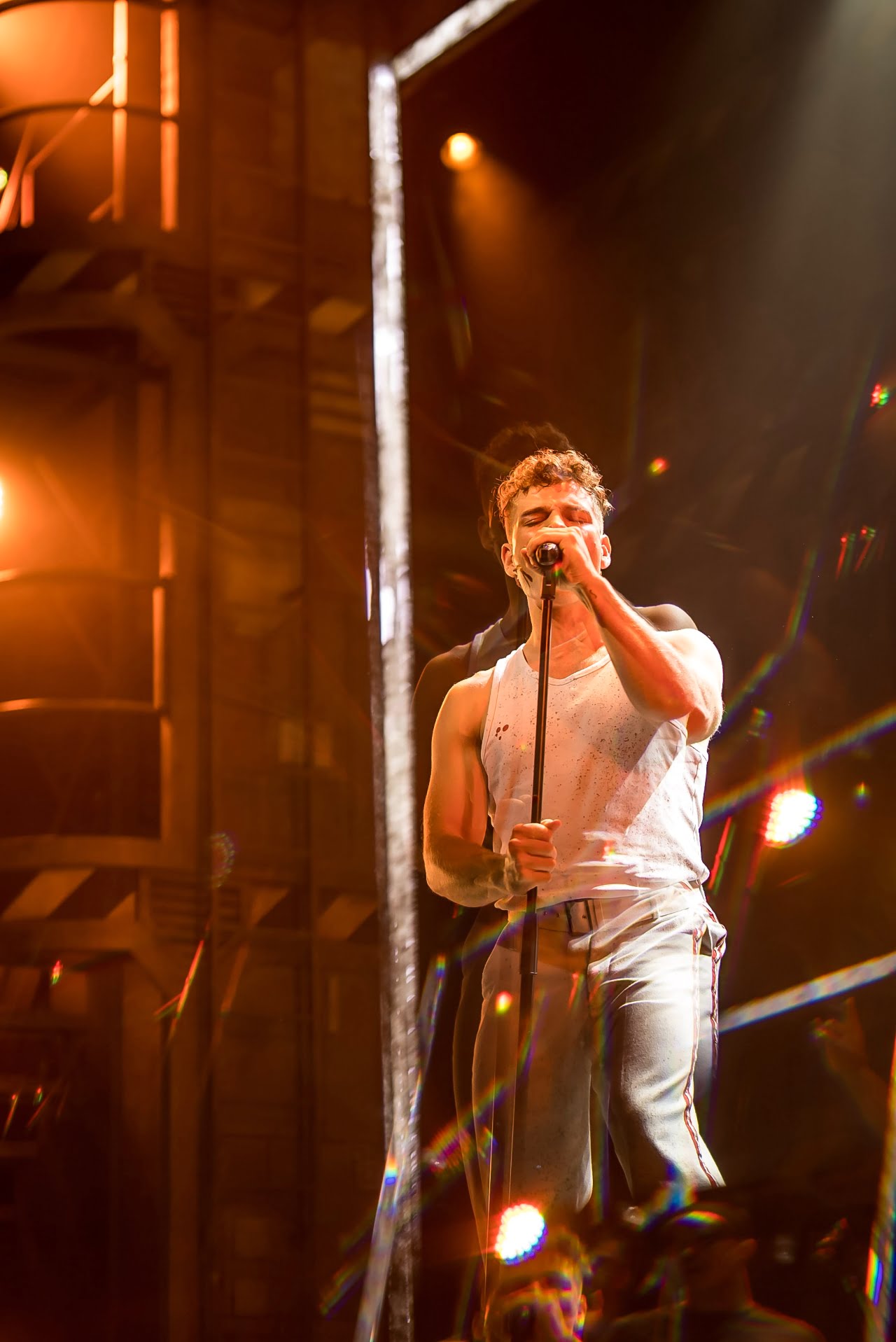 So let your hair down, raise a clenched fist, and clap like it’s the Singapore Indoor Stadium rather than the Esplanade theatre–yes, you’re invited at some points to join in the proceedings like it was Live at Wembley in ’86. You don’t need to be a genius to know what the encore number is and it almost feels like the whole idea was to steer the ship towards that climatic release. It’s shameless pandering of the highest order, but oh mama, it is gloriously fun.

We Will Rock You: The Musical by Queen and Ben Elton

It’s just an excuse to pump out Queen song after Queen song and that’s why it’s a whale of a time. We’re certainly not complaining for sure.

ROG Azoth is ASUS’ attempt at a custom keyboard

Huawei FreeBuds 5i packs a lot of tech...

First look: The Last of Us episode 1