To say the 3S is a minor update is an understatement; that said, why change anything? 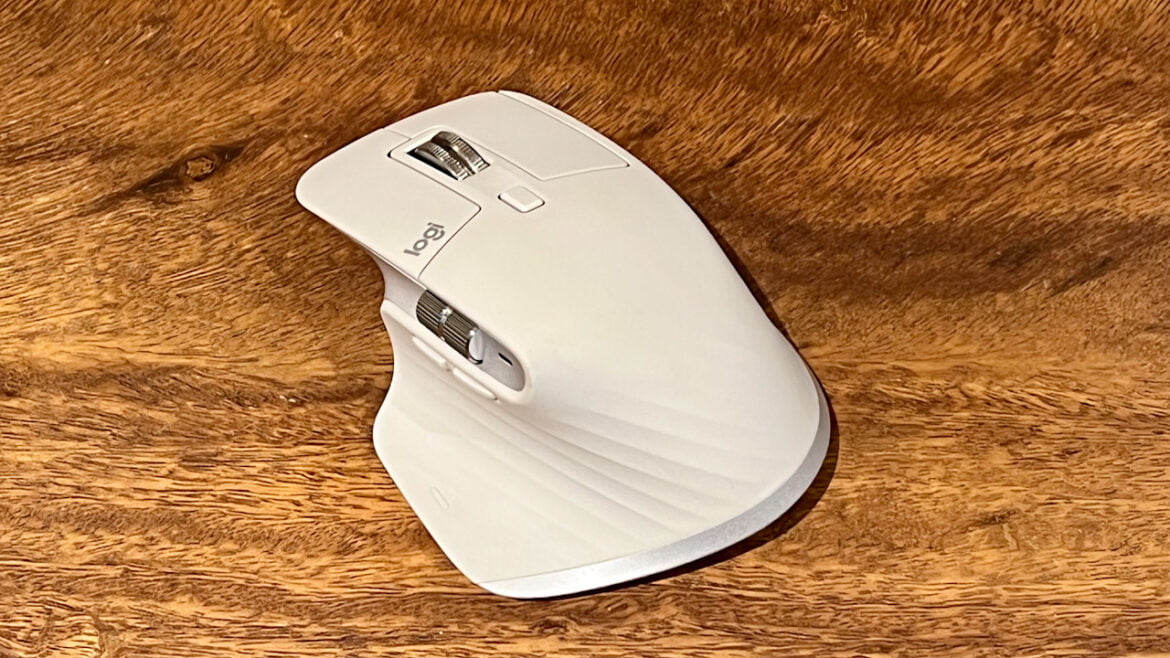 Because I mostly run with a white and black setup on my table, that’s the colour that I requested for obvious reasons. I wasn’t disappointed. It looked quite spiffy with its elegant silver trim and metal scroll wheels, and because it’s almost white, the ribbed curves along the distinct contours are made more conspicuous, giving the MX Master 3S bonus style points.

However, what’s more visible (than the dark-coloured versions) are the hours of wear that leave their mark on the textured surface. I’ve been able to clean it with lighter fluid and Isopropyl alcohol but god knows if this is detrimental to the coating in the long run. But for the time being, everything is hunky dory. 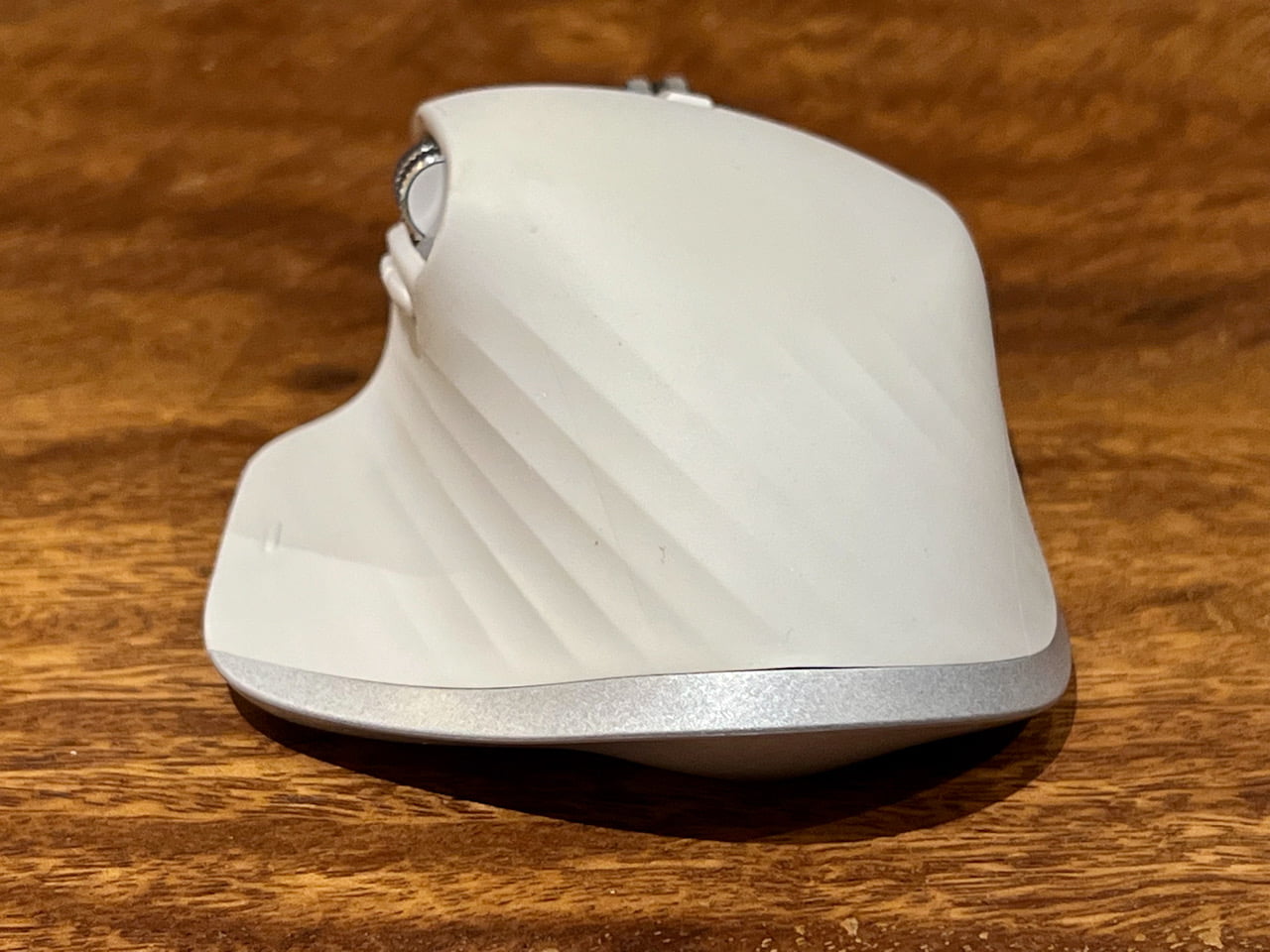 The ribbed surface makes the mouse surprisingly comfortable to grip.

That’s mainly because the MX Master 3S’ chunky-than-hunky shape is one of its best selling points–you can wrap your entire palm around its ergonomically shaped housing. It’s a relaxed grip that brings hours of comfort. That said, the MX Master 3S took some getting used to as I was using much flatter mice prior to this. It was surprising because I used one of the earliest versions for a long time. But once you ease yourself in, it’s hard to go back to anything else, especially when you are constantly at your workstation. The longer you use the mouse, the more you appreciate its ergonomics. The good thing about a mouse like this is that you don’t have to worry about the weight. And this mouse is pretty heavy, weighing in at around 141g, which is almost twice the weight of the lightest gaming mice.

That said, there aren’t many significant changes over its predecessor, the MX Master 3. You can now push the dpi up to 8,000 (vs 4,000) but I think what most people will notice is the fact that the mouse clicks are noticeably quieter. You practically have to bring your head close to be able to hear the audible clicks, making this mouse really friendly around people who are intolerant of background noise. Assuming, of course, that you don’t already have the far noisier MX Mechanical keyboard. 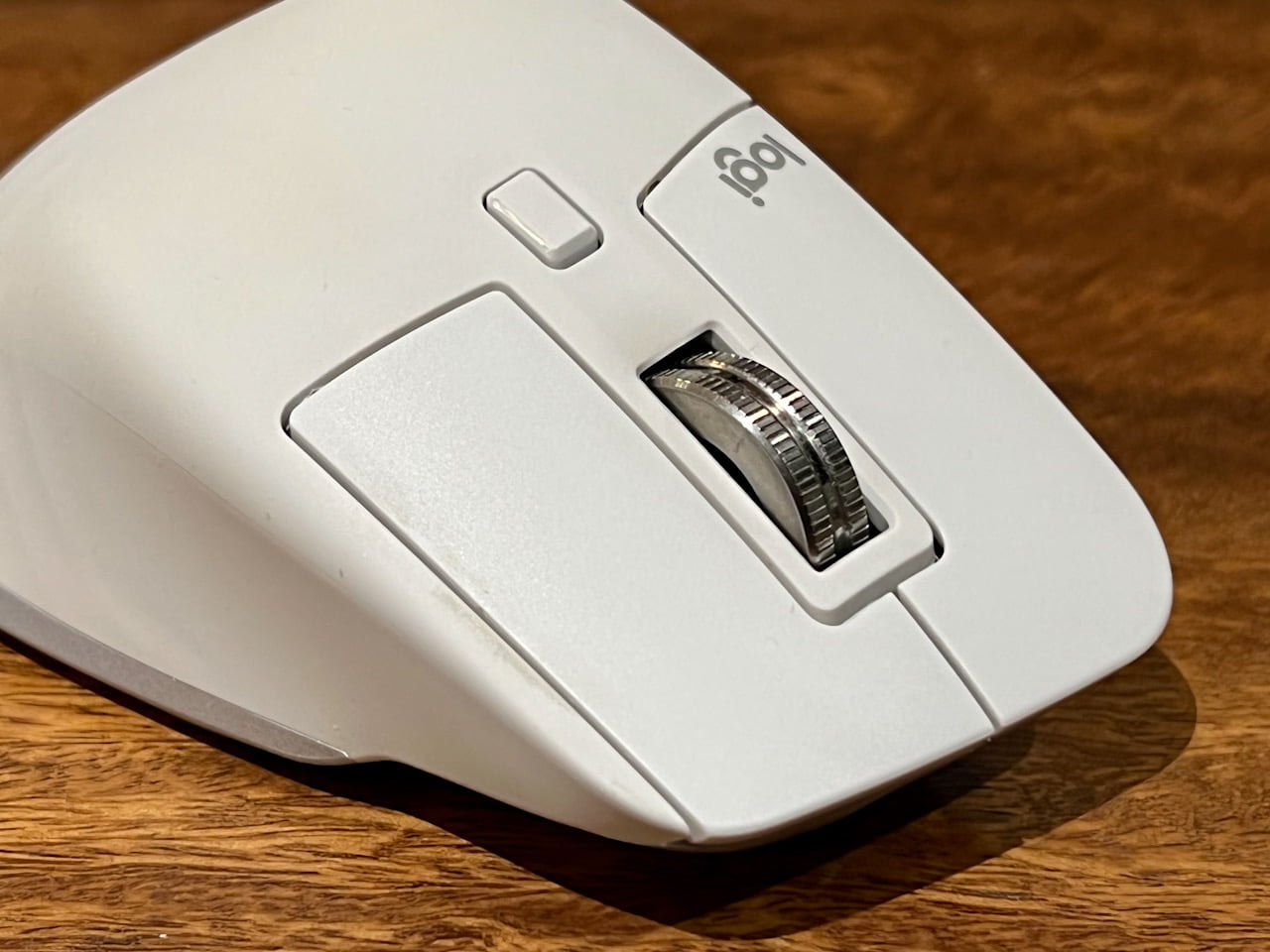 The MagSpeed Electromagnetic scroll wheel is the bee’s knees.

In terms of responsiveness, the MX Master 3S has nothing on gaming mice–it feels a little sluggish in comparison–but for a productivity tool, it is more than qualified for the job. What’s more important is that it has the signature MagSpeed electromagnetic scroll wheel, a legendary-level productivity item. It’s pretty much unchanged and offers quite a good range of customisability.

You can tweak the speed of the scroll, reverse the direction of the scroll (e.g. page moves up or down), or recreate the ratcheting effect of a genuine scroll wheel just by turning on the options. It’s not quite the same as an actual scroll wheel, but it’s close enough. But having such granular control over how you scroll through webpages and spreadsheets is a quality of life feature that you probably can’t live without once you get used to them. This is a pay-to-win item I can justify paying more for without lying to myself.

All about the software

On top of that, you have a bevy of programmable buttons that you can customise through Logi Options+ to maximise efficiency regardless of what application you are using. There are seven buttons in all, with five of them programmable. You simply click on each input, and a drop-down menu reveals several useful options that you can choose from for each button.

For example, you can use it purely to navigate between windows or set it purely for controlling media players. Those who do 3D work may find the zoom and rotate controls useful. You can even custom it to do specific tasks, though that list is exhaustive as it is defined by Logitech. Actions range from opening the calculator app to opening a folder to adjusting brightness. 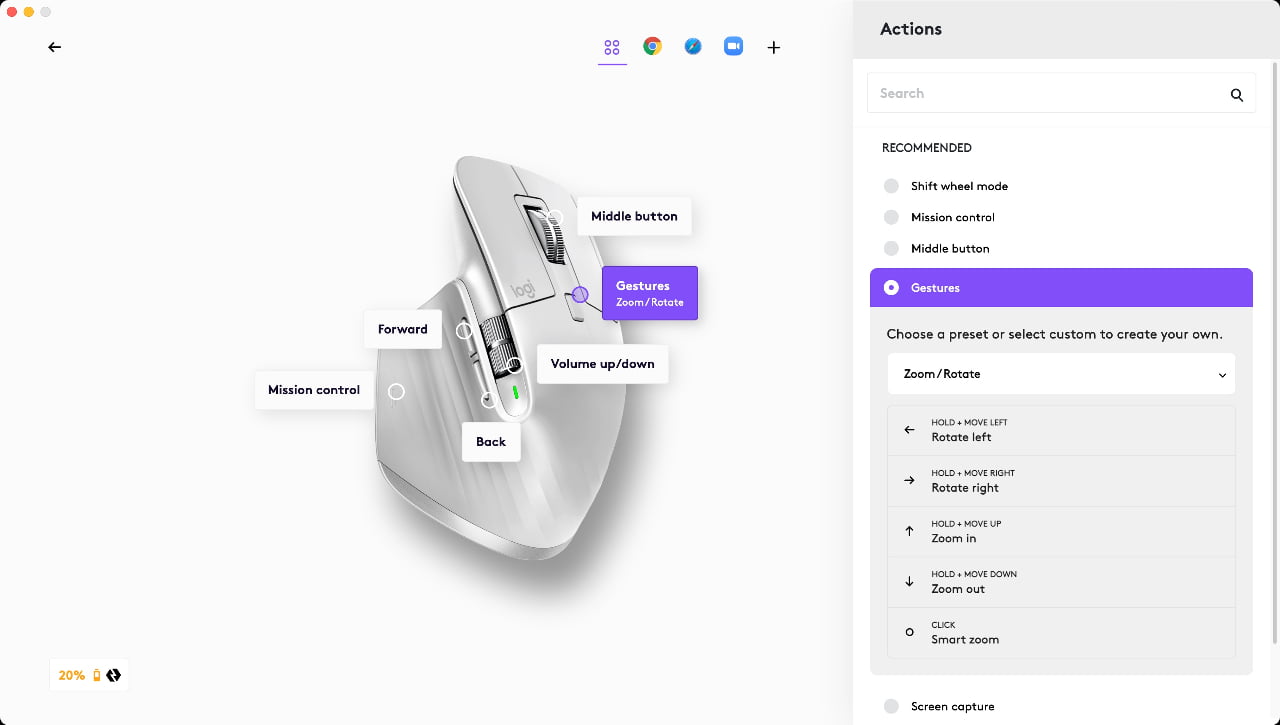 More options than your job options: Granular-level customisation is the name of the game.

While most options carry out a single action, Gestures is unique as it enables multiple inputs through a combination of a mouse button and mouse movement.

The coolest bit is that you can define universal settings as well as specific actions for an app in question. For example, you might want to program a button for switching windows but when you open your media player it becomes a Gesture input. In this respect, there seem to be no limitations. For applications that are not recognised by the system, you can manually add them to the list. I haven’t encountered a problem so far, so either I’ve been lucky or I guess it’s safe to say it works most of, if not all of the time.

Something that I didn’t quite get: there’s an option within Logi Options+ that runs down the connection type for each of the three connection channels; it would have been far more useful to let users start pairing devices from this menu option, or swap designations.

Getting into the flow of things

Like most Bluetooth mice the MX Master 3S can connect up to three devices and switch between them via a button at the bottom. Logitech also includes a dedicated wireless receiver. If there’s a downside to this, many peripherals–even cheap and cheerful ones are offering connectivity with up to four devices. But, not everyone is a psycho tryhard who needs to connect to four devices at once and is constantly switching from one device to another. Also, they don’t offer Flow, which lets you slide your pointer across devices as if you are using a multi-monitor setup.

Flow is one of the crown jewels of Logi Options+, the companion app. After setting it up, you drag the mouse to the end of the screen and you will be connected to the next device as though you were running a multi-display setup.

It is a very convenient feature to have when you work with a Mac and a PC and occasionally (not frequently) have to send files from one device to another that aren’t like 8 or 9GB large or something like that (change your life choices, please). Even if you don’t have a habit of transferring files to and flow, this level of control is in itself pretty useful. File transfers aren’t the quickest, so best if this is kept to incidental transfers; e.g. if someone just sent you a hi-resolution photo and you need to view it on another computer with a colour-calibrated screen. Otherwise, just be happy to let things work and come back to it later. 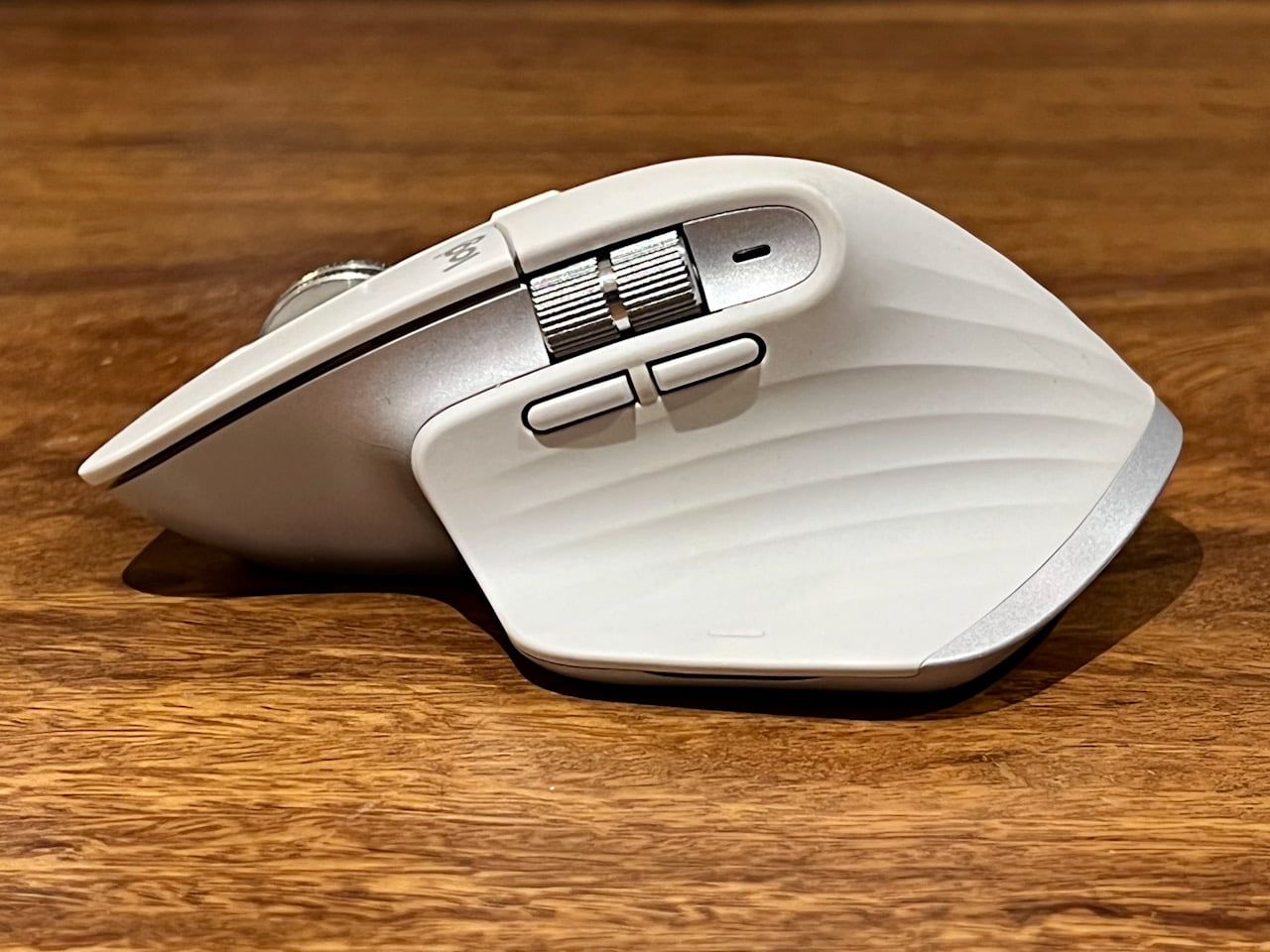 All thumbs: Four control inputs just for your opposable digit.

The battery life is a non-issue, as it takes forever for the 500mAh battery to run out – you charge the battery after weeks of use and a small charge goes a long way. As a heavy user spending more than three weeks felt about right for me to ensure that I never ever had to worry about running out of juice.

Paying $169 for a mouse is always a big deal but as a working tool, I think it really is one of the few things in life that’s spending a little more when you’re using it most of your day. I’m not quite sure if I want to go back to my old mouse now.

There’s honestly nothing new to be said that hasn’t already been verbalised. But all the same, if you are looking for the best productivity mouse, the MX Master 3S is still the gold standard.

Samsung refines the folding phone further with the...

It’s clear to see that the Nothing Phone...

LG’s AeroTower is a cool air purifier that...